Flies buzzing the undercooked hamburgers. Cockroaches scurrying for cover behind the oven. A moldy ice machine. Mystery debris, clinging to the crevices of a meat slicer. Hundreds of mouse droppings, trailing across the hood of the stove.

These incidents are not logged in any restaurant inspector’s notebook. They are among the thousands of food safety violations discovered in the last three years in America’s nursing homes, where fragile residents can least tolerate such lapses.

“There’s huge underreporting of food issues,” said Charlene Harrington, a nurse and professor at the University of California, San Francisco, who has researched nursing home quality.

“It’s an accepted practice to have crappy conditions in the kitchen,” she said. “And people are just totally unaware of it.”

As America’s population ages, hundreds of thousands of baby boomers have found their way into nursing homes, assisted living communities and memory care units. With this wave of seniors has come new dining demands, a culinary call that has been answered in some places with gourmet chefs, a panoply of fresh fruits and vegetables and other healthy flourishes.

But dangerous and unhealthy conditions persist.

FairWarning’s investigation, based on inspection reports, federal data and interviews with residents and long-term care experts, found that residents nationwide are at risk for foodborne illness from unsafe kitchens.

Across the country, 230 foodborne illness outbreaks were reported from 1998 to 2017 in long-term care settings, according to the Centers for Disease Control and Prevention. The outbreaks resulted in 54 deaths and 532 hospitalizations, and sickened 7,648 people.

Not all foodborne illnesses in long-term care are directly caused by poor sanitation; some outbreaks result from contaminated food brought in from the outside.

But critical internal mistakes have happened. Last year, 29 residents and 32 staff members at the Pine View Care Center in Black River Falls, Wisconsin, were sickened in a norovirus outbreak, according to the government’s inspection report. Investigators found that kitchen staff had repeatedly failed to check the sanitizer levels in the dishwasher and didn’t know the injector was clogged, the report said. The facility’s administrator did not return phone calls or email for comment.

While foodborne illness is a threat to any age group, people over 65 are especially susceptible due to weakened immune systems, chronic diseases, immobility and age-related changes in their digestive systems.

Yet unlike restaurant patrons, who can walk away from bad meals — and trash the establishment later on Yelp — long-term care residents are basically stuck.

Dangerous food handling common
Unsafe food handling was the third most frequently cited violation last year inside America’s estimated 15,700 nursing homes, behind only infection control and accidents, according to data from the Centers for Medicare & Medicaid Services, which regulates nursing homes that receive federal money. These figures do not include assisted living communities, which have no nationwide centralized data collection and are licensed by the states, which create their own standards.

In 2018, 33 percent of nursing homes were cited for violating the federal requirement to safely store, prepare and serve food. 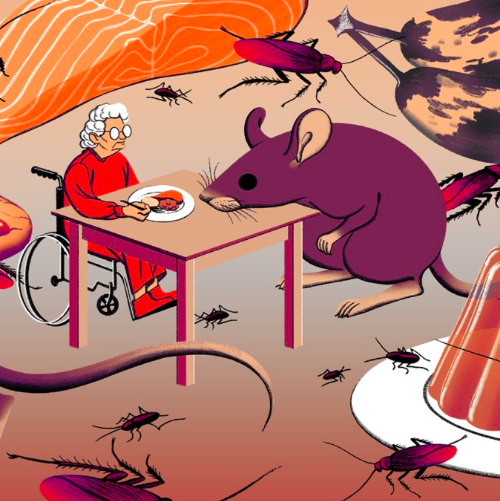