Family members and staff at the Bayview Health Care nursing home received the news that they had been dreading since the coronavirus outbreak reached Connecticut.

Two residents in the long-term unit of the 127-bed facility have tested positive for COVID-19, the disease caused by the virus. One patient, a female, remains in isolation at Bayview while another resident, a male, is hospitalized.

A spokesman for the nursing home's parent company, Athena Health Care Systems, confirmed the positive cases but declined to provide specifics, citing privacy regulations. Any other residents suspected of having the virus have been tested, and results are pending.

The first known case of the virus in a southeastern Connecticut nursing home comes as the state prepares to move residents who have the virus to separate facilities.

Earlier this week, the Department of Public Health notified families that the state would be designating specific nursing homes for residents who have testified positive for COVID-19.

The Connecticut Mirror reported Tuesday that 85 nursing home residents in Connecticut have been diagnosed with the disease; half have been hospitalized, and 11 have died. The article indicates that 30 of the state's 216 nursing homes have had at least one confirmed case, but the facilities are not being publicly identified.

It is not immediately known which facilities would be designated and when the transfers would take place. The DPH said it is arranging for Zoom meetings for residents and their families to ask questions.

Bayview and other nursing homes around the state prohibited visitors earlier this month and began wellness checks on employees.

Front line staff at Bayview said they are committed to taking care of their patients but are alarmed at the lack of personal protective equipment, or PPE, and other safety measures at the 127-bed facility. Former and current employees who spoke with The Day asked that their names not be used because they said they feared being fired or denied unemployment benefits. They said the first case was confirmed on Sunday, but staff were not notified until they arrived for their next shift.

Staff members said they were only issued masks after the case was confirmed, though the masks are not the preferred N95 type, and that they don't have protective gowns and other equipment. The facility is offering staff an additional $100 in hazard pay per shift.

Bayview is owned by Athena Health Care Systems, which operates 22 nursing homes in the state. Athena operates the Evergreen Nursing Home in Stafford, where The Hartford Courant reported this week that three patients have died of COVID-19 and 11 more are infected.

"Despite our best efforts, an individual who is part of our community did test positive for COVID-19," Brown said in an email response to questions about Bayview. "Our thoughts are with the resident, their family and others in our community impacted by the coronavirus. As Governor Lamont stated during his 3/30/2020 press conference, this virus has affected many nursing homes across the state, including ours." 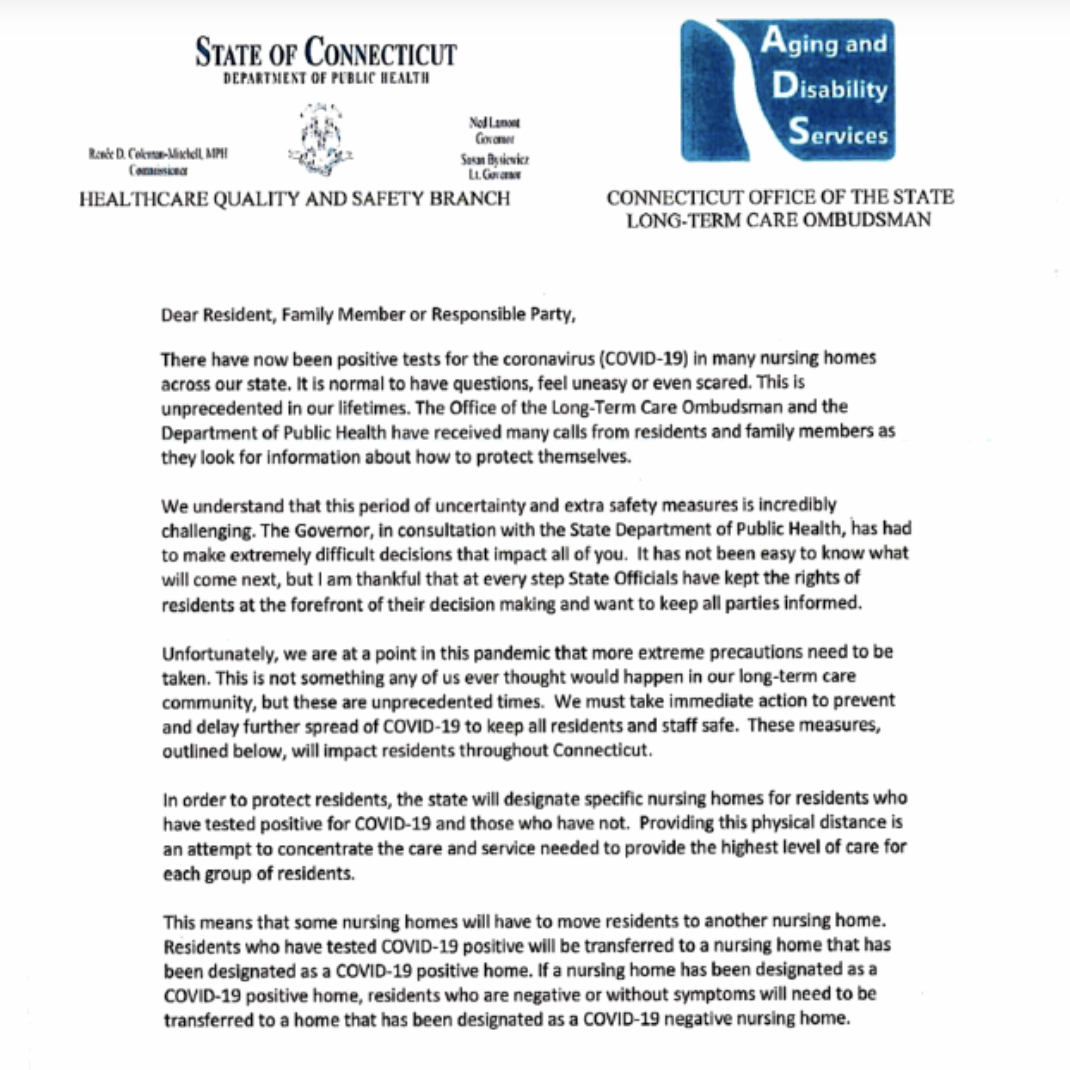